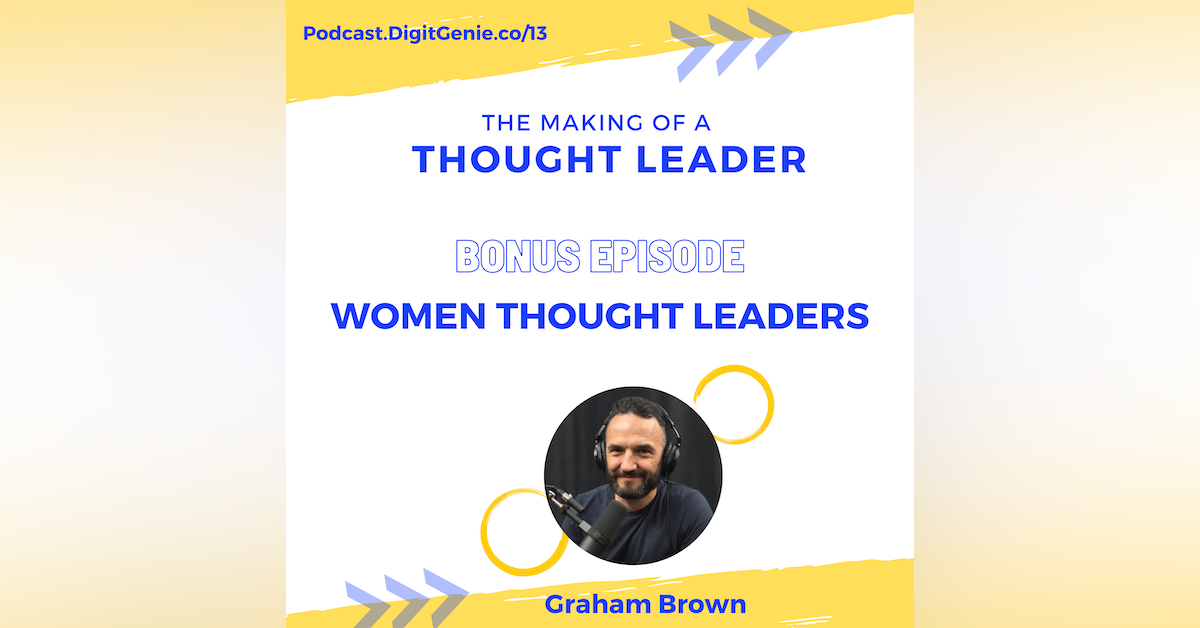 Tell me what do you think about women building their thought leadership? How can they take charge and break the barriers? I welcome your thoughts with me on Surbhi@DigitalGenie.co

[00:00:00] Surbhi Dedhia: The pandemic has accelerated a lot of trends around there were already trends emerging, leading up to 2020, such as the digital technology adoption in businesses, hybrid model for retailers, online banking applications, et cetera. There is one trend that needs acceleration equally, and that is women thought leaders.

[00:01:27] Surbhi Dedhia: In episode two of the making of a thought leader podcast. I explained the eight P framework that helps building the foundations of a sustainable thought leadership in my work with women entrepreneurs, I find that women often shy away from making bold galvanizing statements because being bold in scale.

[00:01:54] Surbhi Dedhia: I absolutely understand this fear. And trust me, I have been there too, [00:02:00] but these bold blunt ideas are exactly the material that makes us unique and prove magnetic to the potential followers or prospects. Last week on the podcast, I spoke to Graham brown, who is a thought leader on telling brand stories.

[00:02:19] Surbhi Dedhia: And while speaking of the latest trends on social media, about building brand stories, Graham shared his thoughts on women thought leaders and women picking up thought leadership. I'm sure you will have a great time listening into his book perspective. So let's listen in.

[00:02:48] Surbhi Dedhia: And a lot of people posting a lot of you know acquaintances, friends from Singapore on part of that campaign.

[00:02:55] Surbhi Dedhia: It was interesting to see because, it shows umpteen number of stories of courage [00:03:00] and beating the odds to be who you are. And also got me to a point of thinking that how many women are out there who are actually taking up the mic or taking up the position of thought leadership.

[00:03:18] Graham Brown: Well, regarding the women. Not enough. It's the answer that we're nowhere near, even though, I mean, in education globally, I think in many countries now, women, girls outperform boys at school in many subjects. And that now is a case of, well, they've shown that they can do this.

[00:03:40] Graham Brown: And I think in the early stages of business as well, they outrank men. But the problem is, is obviously as things evolve, you know, some drop off with families and some drop off because of toxic workplaces and so on. Then there's this subset of all those people, which is the [00:04:00] ones that step up to the mic, which is, again, we don't talk enough about this.

[00:04:04] Graham Brown: What you're doing is, is fantastic. It's stepping up and its not being afraid to face criticism. And it's less, I don't think people are so overt with a criticism. They weren't going, oh, that was terrible. That podcast that you did, but it's the subtle nudges that we don't appreciate, especially, being a man, even growing up as a boy, you can think about the subtle nudges, the grandparents give you the toys and it's a tank as opposed to a dull, but some nudge because that takes you down a path, which is, ah, it's okay for me to be a risk taker rather than a carer. It's never explicit is it's never saying that you're a boy. You should go out there and do man things and take risks and climb mountains and smashed through barriers and hurt yourself. Nobody ever says that it's about role models and nudges. Think about it with media [00:05:00] podcasting and, you know, women entrepreneurs, there are plenty of women entrepreneurs, but there's a subset of them who actually step up maybe because a they're not enough people like you doing it yet.

[00:05:12] Graham Brown: And therefore they don't see it as a done thing. Or B maybe I don't want to answer for you, you know, maybe it's like, are you more acute to the criticism of other people than men off? For example, maybe that comes back to the tank thing. Right? So I drive a tank. I don't care.

[00:05:31] Surbhi Dedhia: I also think that it is imposter syndrome. There are people better than me. From my perspective. I mean, that was a clear example of, I helped others do launch their podcast and it never occurred to me I could do one and you know, it came back to me, you know, there was this only a nudge that came through and then said, Hey, why don't you do your podcast?

[00:05:51] Surbhi Dedhia: You're telling me so many things, why don't you do yours? And I was like, oh yeah, I could do one. But I never thought I was good enough to [00:06:00] actually run a podcast on my own. And of course, as you will always say, podcast is a long-term game. It's not one day that you show up on a live and that's about it. You have to keep doing it to build your audiences and pass your message encourage people as what I always try to do on this podcast.

[00:06:17] Surbhi Dedhia: So I think imposter syndrome is another that comes to play.

[00:06:22] Graham Brown: Hm, it's powerful. And maybe people don't realize it, even smart, intelligent people like yourself who think probably that doesn't affect me because you know, in other walks of life, you've had a successful career, et cetera, et cetera. You may not think you have these kind of glass ceilings, these limiting beliefs, but we all have the, maybe women face them a lot more because, you know, you just don't think it's something that you would do because there aren't enough examples.

[00:06:51] Graham Brown: It is. It's sort of a chicken and egg situation. I mean, even if you look to the media is changing slowly, but we celebrate. I say we collective, [00:07:00] we celebrate people like Michelle Obama and Hillary Clinton, but these are the wives of famous men. You know, that's what kind of I feel is missing is that. We're not celebrating their stories as people that made it themselves, they got there and they became famous because they were married to a famous man.

[00:07:22] Graham Brown: What kind of story does that send out to people? Where are the women who made it themselves? There's not enough of them. And in some way, the media helps reinforce these narratives about people and imposter syndrome is because actually it's all part of the system, isn't it? You know, if you suddenly allowed people, everybody to step up and create their own.

[00:07:46] Graham Brown: Podcast or create their own TV show or write their own books. Then what role would media have? You know, they wouldn't have control over the industry anymore. They would just become just another voice. They'd become one bird in the tree [00:08:00] and we don't want lots of birds singing in the tree. We just want one and that's sort of the official model, isn't it.

[00:08:06] Graham Brown: So, you know, I think the imposter syndrome really is very, very subtle, but yet extremely powerful. And maybe that's why it does work because we don't realize it. But then, you know, you're an example, you're out there, you're doing it. And it just goes to show that there's nothing really, that stops people.

[00:08:27] Graham Brown: And I feel that people are worried about looking stupid, sounding stupid. You just got to get over yourself. That's the key is just get over it because you know, between you and doing something amazing in your life, is this barrier of fear, this limiting belief, and there's all something amazing on the other side, whatever it is.

[00:09:06] Graham Brown: Yeah. There's a great quote in Japanese, which sort of reads the frog who lives in the well never sees the sea and you know, it's like the frog volunteered to live in that world. It's the point it's comfortable. It wants to live in there, right. It will never know the ocean. And I think, you know, if you're an entrepreneur, you're probably quite curious, you want to go out and know the ocean. So it's all about how do you break through those comfort barriers.

[00:09:32] Graham Brown: On the other side, there's something quite amazing. And without sort of going through the prescription for it. But I think the starting point is surround yourself with good people like yourself. You know, it's like people who are doing this stuff who then, you know, it changes. Behavioral norms about expectations about what's possible.

[00:09:49] Surbhi Dedhia: Right? Absolutely. And I feel that first step that I took to start doing my own podcast. There's this whole new world, which has opened up, like [00:10:00] we both are talking today because of this whole avenue, that podcast allows to talk to each other, talk to other different people, meet new people. And I think I value this so much more than.

[00:10:13] Surbhi Dedhia: Doing a blog post, start doing a series of things in that sense, and I think identifying your true self also helps because as a person I'm quite a chatty, I love that social interaction rather than just a one-way communication, which probably a blog or a white paper or the book offers.

[00:10:34] Surbhi Dedhia: So I think that that is really cool. And I like how you put it you know, you very often, we just, volunteer, ourselves to be in that mode, not realizing that, you know, we are the ones who are volunteering.

[00:10:49] Surbhi Dedhia: I hope this bonus episode provided additional perspectives for all you entrepreneurs out there and especially women tuning in [00:11:00] today to take charge and build your thoughtleadership. I will see you in the next week with yet another engaging episode on the making of a thought leader podcast. If you find this podcast valuable, please add your reviews on apple podcast, as that's a great way for letting me know that I'm on the right track here.

[00:11:25] Surbhi Dedhia: Also, please share this podcast with people, entrepreneurs, executives, you know, and those who need the boost to start building their thought leadership. So until next episode, cheers, stay safe and take care..